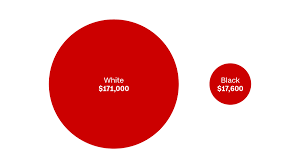 This past Wednesday, in the wake of George Floyd’s death at the hands of four Minneapolis police officers and the worldwide protests that followed, CNN published a feature titled “US black-white inequality in 6 start charts.” Written by senior writer, Tammy Luhby, who covers economic mobility issues for the network, the piece illustrates just how wide America’s racial gaps are in 2020 relative to wealth, income, unemployment, poverty, healthcare and mortality rates specifically related to the COVID-19 pandemic.

For example, the average wealth of a white household in the United States exceeds that of black households ten times over. The median annual income of white families is $30,000 greater than that of black households and African Americans are more than two-and-a-half times as likely to live in poverty. And, black Americans are roughly 60% less likely to have health insurance than white Americans.

These disparities have steadily become more and more pronounced during the last half-century, and COVID-19 has only exacerbated them further, both in terms of economic stability and health and wellness. Black people in this county are almost twice as likely to die from the coronavirus. Moreover, after record low unemployment for several months—when African Americans were still nearly two times more likely to be counted among the unemployed—the rates skyrocketed since March, which again has only served to amplify racial inequity.

Writing in The Guardian, Lauren Aratani and Dominic Rushe note that:

“Workers of color, particularly black Americans, have long been overrepresented in the lowest-paying service and domestic occupations, such as taxi drivers and restaurant servers. Working in these fields leads to lower wages—black Americans have the lowest median wage of any racial group in the US—and the jobs are often seen as the most expendable during an economic downturn.”

Here in the Twin Cities the black-white income is the second worst among the 100 largest metropolitan areas in the United States. Since the pandemic began, well over 30,000 low-income jobs have been lost in Ramsey County alone. And, although African Americans represent approximately one-eighth of the county’s population, they make up one-fifth of all those who have filed for unemployment since March. In fact, at least one in every three black workers in Ramsey County has lost their job during this time.

“The triumph over racism, inequity, and intolerance is a monumental task that requires the participation of all of us, not merely in our speech and writings, but in tangible and meaningful action. And that is why the work we do in partnership with our neighbors at Community Action Partnership of Ramsey & Washington Counties is as vital as ever before. Once again, we send our deepest condolences to the family and friends of George Floyd, to the residents of the Twin Cities, to our larger Minnesota community, and those hurting everywhere during these unsettling and turbulent times.”

The time for monumental and enduring change is now. History will judge us harshly if we do not take care of one another as poverty, racism, and small-mindedness truly diminish us all.