Our Statement on Race Equity

At Community Action Partnership of Ramsey & Washington Counties, we honor the inherent value, diversity, and dignity of all human beings. Further, we recognize the unique circumstances and needs of every individual and family for and with whom we are called to serve and vow to treat them with respect, compassion, and consideration. Because these values are foundational to our mission and our work to end poverty, dismantle racism and bias, promote equity and justice, and cultivate a culture among staff and volunteers that fosters collaboration, inclusion, and a sense of belonging, we pledge to hold ourselves accountable at all times.

Although the Twin Cities and greater Minnesota has long ranked at or near the top for many quality of life indicators when compared to other major metro areas and all 50 states, our communities also suffer from some of the widest black-white gaps in the nation when it comes to employment, education, housing, and healthcare. These rampant disparities have only been amplified by the COVID-19 pandemic, that has deeply wounded the social, economic, and general health and wellness of African Americans, our indigenous populations, and other communities of color.

At Community Action, we always encourage people to bring about positive change in their communities through education and engagement. Many organizations have been working on these issues for years. These are just a few  working towards realizing racial equity and eliminating racial disparities in the Twin Cities:

Data on Inequity in the Twin Cities

Community Action has long worked to dispel popularly held misperceptions surrounding the issue of poverty by educating the community about the systemic roots of poverty. To fully grasp how poverty disproportionately affects BIPOC members of our communities, we’ve put together a list of data that only begins to illustrate the historic and systemic roots of poverty in America and the Twin Cities and how race and ethnicity are inextricably linked to poverty.

The Federal Poverty Guideline are an economic measure used by government agencies to determine whether an income level qualifies a family for certain government benefits and programs. Eligibility for many of our programs is determined by this metric. While it by itself is not what determines poverty, it a good starting point using other data to begin a conversation about poverty, and how it is often determined on racial and ethnic lines in the Twin Cities, Minnesota, and throughout the country. 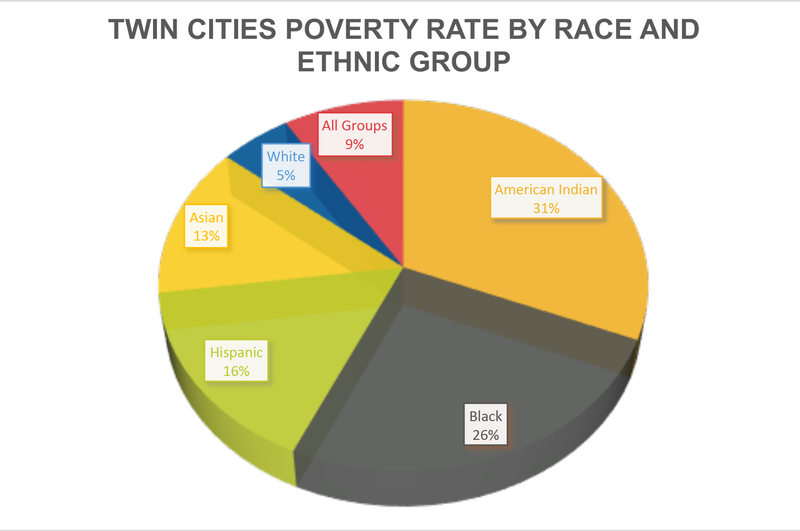 Data for the Median Annual Income in the Twin Cities demonstrates a similar disparity by racial and ethnic group: 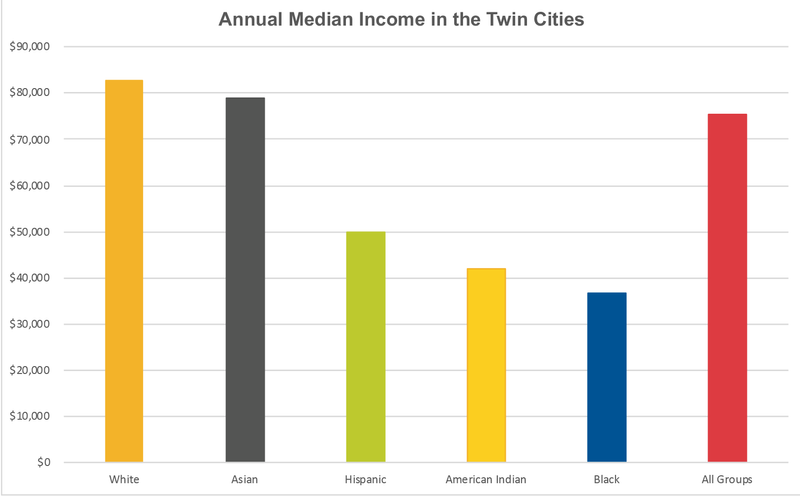 When a household spends 30% or more of its gross monthly income on housing, that is considered a "Cost-Burden Household". People living in households who meet or exceed the 30% threshold struggle to make ends meet, which forces people to make tough decisions, like whether they have to sacrifice healthcare coverage to get food on the table. These trade-offs often lead people to experience lower outcomes of well-being for themselves and their children.

Percentage of Cost-burdened households in the Twin Cities by racial and ethnic group: 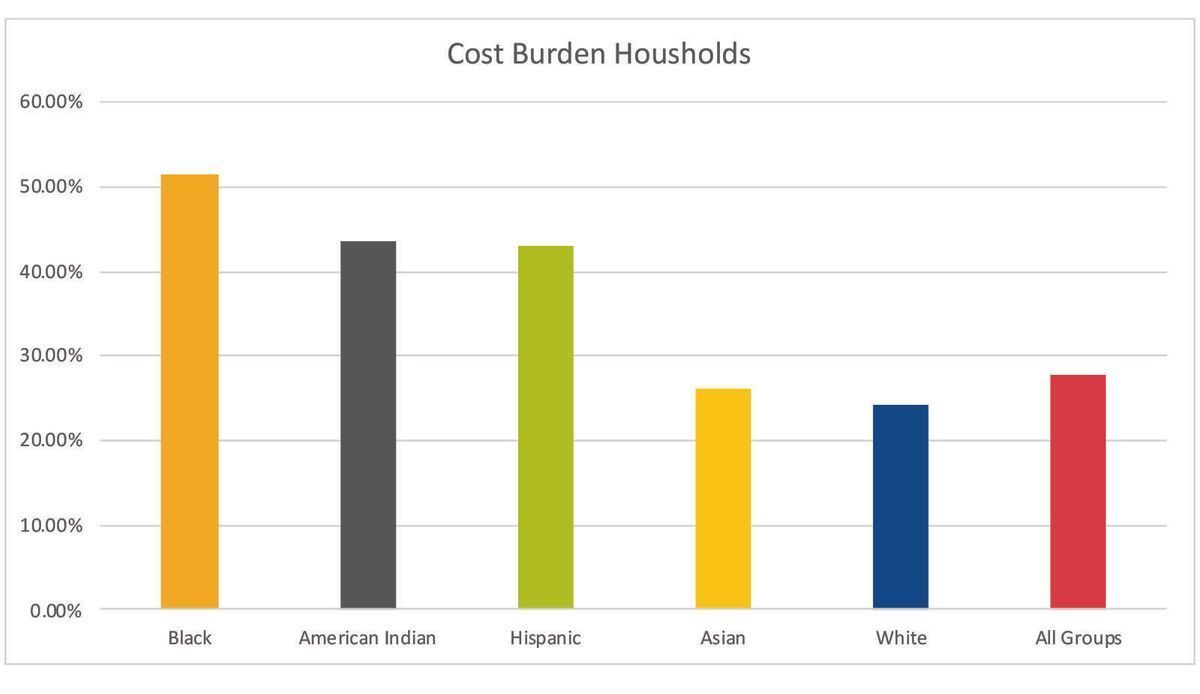 Percentage of Minnesotans under the age of 65 in the Twin Cities without healthcare insurance by racial and ethnic group: 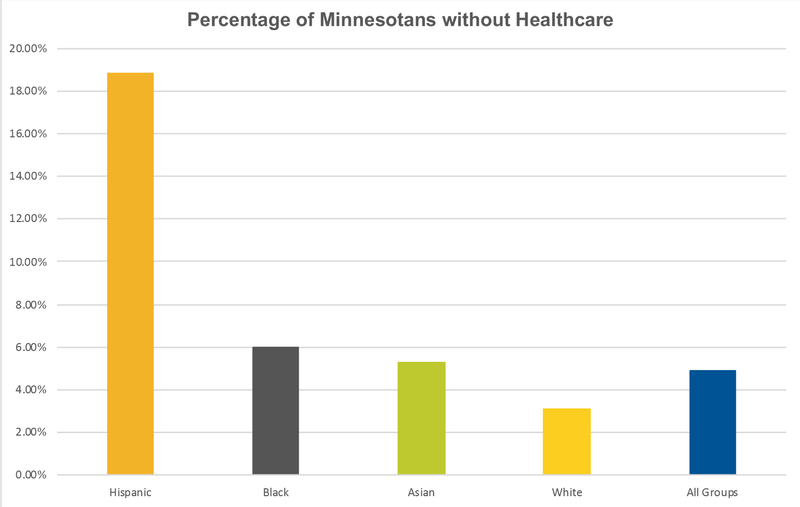 Homeownership is the method by which most Americans increase their wealth. Homeownership is one of the largest contributing factors to the wealth disparity drawn  between people on racial and ethnic lines. Again, homeownership rates in the Twin Cities demonstrates a stark racial inequality as it pertains to wealth.

Homeownership rate in the Twin Cities by racial and ethnic group: 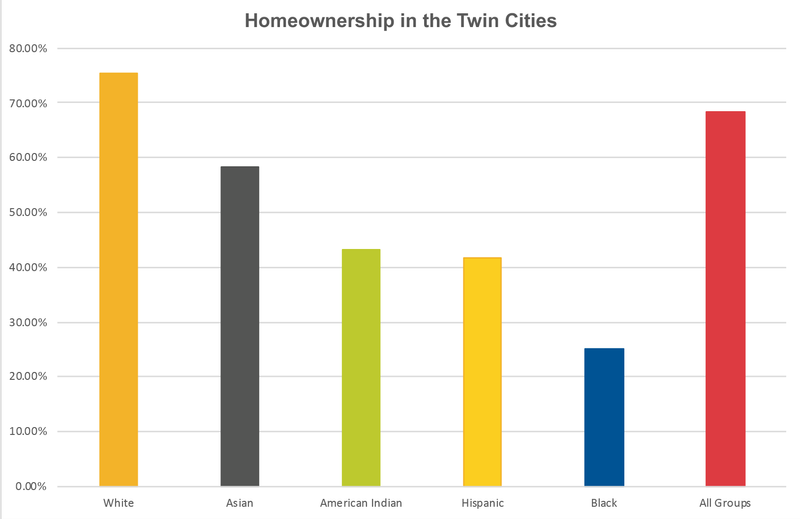 Percentage of people of color in Ramsey and Washington Counties:

Percentage of people of color in: